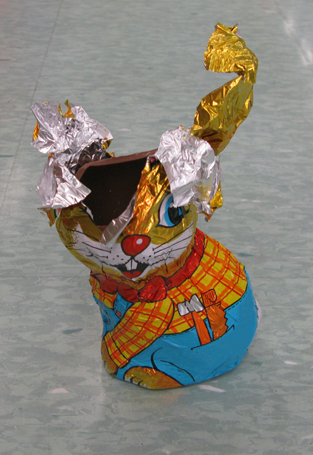 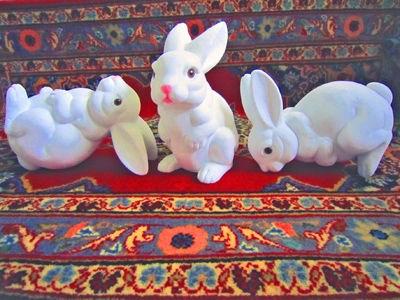 Pageantry and symbolism are strong and early markers in our lives – preparations, gatherings and processions that impose, impress, mark boundaries of those with knowledge, those without. Family, local, national, religious, political and military events- all create ritual, bestow powerful narratives and burn brightly, or forebodingly, as markers of time, place and belief. But what happens if the event or specifically, a single symbol is displaced – physically, culturally, conceptually. What happens to its story, its resonance? What effect does that have on what we see, understand, remember? The shift from defined symbol and memory to otherness, possibly nothingness – that space full and void in meaning – is potent. Transformation challenges a sense of the definite, the location of belonging, the sense of self we experience, as we are in or excluded symbolically.

Easter is a powerful example –  a moveable feast in so many ways. Alone, the complex calculations of its celebration in Christianity which have altered over the millenia are indicative of (once/still) intertwined powers of state, Church and the individual. The religious symbolism of resurrection, the pagan history of Spring rites and the commercial presentation of Easter, each aim to satisfy (create) need – to believe, to feel, to be. And then the many cultures which do not celebrate this event. The realisation that inclusion also marks exclusion works in both directions. What is your first Easter memory? Are you observing or participating?

I am six, standing in the school playground with my class. Our Easter baskets, small paper creations coloured in and glued enough to hold one small Autumnal egg, have been left on our desks in our classroom. The Easter Bunny is coming today. We do not mention the strangeness that it will happen again on Easter Sunday. Nor that it clashes with stories from our scripture class. Dissonance is suspended in the rare air of belief. Suddenly the Bunny, tall in full glowing white, begins to appear across the asphalted grounds. We believe, and that is enough. But as the Bunny shakes my hand, a transformation begins. There is a wide patch of skin between the white Bunny hand and the white Bunny arm. Where is the fur? A possibly human wrist? Belief is suspended in one breath, beginning my unknowing, my awareness of other stories, other layers of engagement, that skin beneath the skin. Years later, I discover it was one of our mothers, a neighbour… 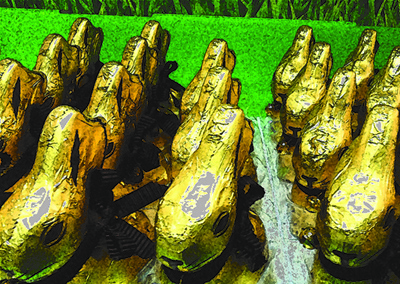 The Easter Card series began in 2004, with the Three Wise Men of Mayfield Easter 2004. Three figures, removed from the season, the reason for their existence, sharpen the edges of belief, culture, attraction to objects. Over recent years, it is the rabbit which has endured – the hunt, Easter(n) philosophy and military engagement. Perhaps in isolating symbols, we may see another layer of human (dis)connection, which allows narratives to be exchanged, transformed. It may be in the comparative (of East/er, for example), that the superlative can be openly refined.

Consistent with its motives, the 2014 card, ‘the man behind the rabbit in the hat‘ , below, was released on 30 August 2013 – just after Australia’s Christmas in July, of course… 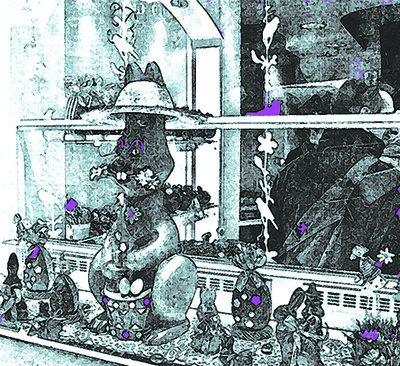 the man behind the rabbit in the hat_easter august 2014_cecilia white

Exploring the space between belief, culture and self, this card enters that space to become a coastcard: coaster and postcard in one communicative gesture. There is an inextricable link between beliefs and celebrations  –  and each attracts, enlivens, bonds. We drink and eat together, we engage. Equally as powerful, we can manipulate: a false number on the back of a coaster, using celebrations as a marketing opportunity…So, what happens behind our beliefs, our celebrations? When traditions shift geographically and culturally, what is revealed and what may be hidden? This year’s card has a six year history of development…

‘I am standing outside a small family run chocolate shop in Lille France just before Easter 2007. The owner has taken great pains to dress the window  –  bright pink, milk chocolate brown and an old white straw hat on the tall rabbit. I am reminded of the magician’s trick of pulling a rabbit out of the hat – manipulation and wonder in one. I am told this window has been the same each Spring for many years – a celebration of life, a familiarity for locals. It contains a simplicity and joy – and is strikingly devoid of price tags. When I desaturate the image, a man behind the rabbit in the hat is revealed. Dressed in a trench coat, leaning forward in conversation with his back to the display, his manner conjures reflection –  he becomes a symbol himself about the space between beliefs and behaviours, the potential to manipulate awareness, to wonder about the manner in which we carry and communicate our selves. This image of covert and overt plays on my mind back in Australia – where celebrations seem to shift to the point(lessness) of repetition – corporate/corporeal manipulating belief (in ritual, in living and in our selves), as in Christmas in July.

Using the rules of consumption in space and time, not celebration, it stands to reason that easter must then follow not longer after, and whenever we need it or any other celebration. Unless perhaps, it reveals how we may conjure ways to avoid a void.

There is a saying in Buddhism, ‘your future is behind you‘. What do you believe?