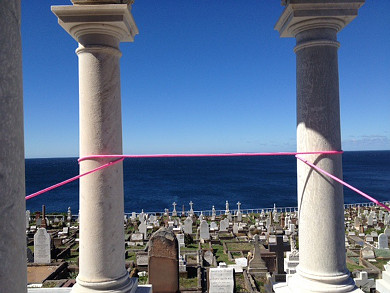 String, both as object and text, opens the mind and senses to process and perception. String reveals a paradox of duration (length) and release (un/tying). As a process string binds, cuts, joins, knots, loops, shapes, reacts to and alters its environment. We recall packages, body wrapping, knotted hair and haulage. Tied to the process of using string is its ephemerality, its shadow of other meaning. Our perceptions shift as we cut ties with (in) securities and recall experiences of death, loss, openness, ambivalence, time. And each of these has its shadow – life, memory, restriction, certainty, untime. It seems that time is a piece of string.

Waverley Cemetery, hugged by living green hills, faces open sea. Its history of loss, change and time seems bound to our own need to explore how we are may be wrapped in traditions, beliefs and death. Are we tied (down) to the passing of time? How do we lose or gather ourselves? What may bind us? This project had to begin in the cemetery. Where it ends is a question for another time – if one exists.

It is one thing to plan a process, an intervention. It is another to enact it – for it is in the action that the physics of life may arise. We know the law ‘ for each and every action, there is an equal and opposite reaction’. What is life without loss? What do we fear and yet pursue? The tight string of order and containment breaks. We float into the less clichéd, the less contexted space between land, sea and sky. We loosen focus and find the lesser spaces, between spaces, space captured within space. Walking the road, past markers of wealth, religion, war and love it is the small space of the almost-temple that attracts. The detail within an expanse of monuments creates wonder. My mind trails back to the Muses, the Greeks and the salted air, to Nemerov’s poem ‘the salt garden’ – we are salt in blood and tears. 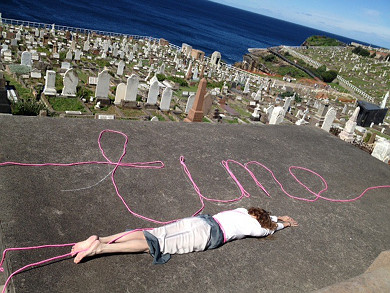 time is a piece of string, cecilia white

The geometry of this space demands attention – warmly, openly. It offers permission to our hesitancies to stand on the dead, to touch monument, perhaps to come close to our own human condition. Each of us had lost family and friends, found grieving confusing, lacking in substance. Pink string, white stone, blue sky bring energy and memory into this geometry. We release our resistance, and are lead by the space into playfulness, pulling and pushing the string, making the wind work against the slightly slackened lengths between pillar, making our bodies work too. We tie us to the temple, and the temple ties itself to us – tension between belief and desire, loss and time. Ambivalence plays across the shadows and into the light. 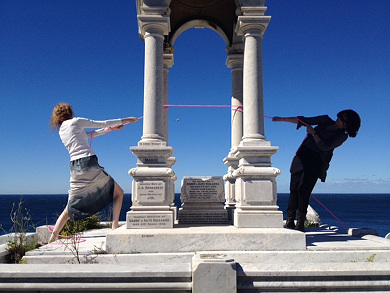 Unlike the dislocation of self from self, if there are many ways of being, the pink string, salt eaten stone and cloudless sky provide an intimate expanse, for us to unravel our tightly bound senses. We return, perhaps to our child selves, or other self, and I wonder if we are following the string homewards. String locates us closer to our physics – taking actions for each of ours. We are bound to something called our selves – and in being tied we may be released to others. We unwrap our bodies and laugh. Was this what we had planned? What is certainty? How long is a piece of string? Five hours? That is how long we stayed at Waverley Cemetery and surrounds. How long is the self? Pink?