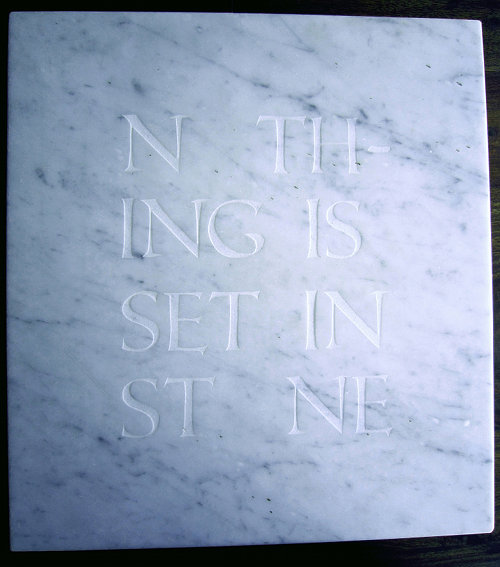 Colloquially, saying that ‘nothing is set in stone’ is one way mediators may reassure their parties that conditions are negotiable, and that commitment is still a way off; it is also unsettling. Cecilia White’s new collection, N THING IS SET IN ST NE, acts in a similar way between writer and reader, with her linguistic text (horizontal) shot through with archaeological and historical context (vertical) and mythological metatext (transversal). Her poems are unsettling to those reassured by stasis and unprepared for change; fluid transformation essential to life, including how memories twist and distort: universal change, such as inventions that alter the course of history (Gutenberg, in ‘the selected’) as well as private metamorphoses (‘small infidelities’, in ‘intralibris’). The missing ‘o’ reminds us at once of the Barthesian zero and the sacred syllable, ‘om’, the ‘small fogs of vowels’, as White calls our unimpeded breath and the interstices or empty spaces of logic. Originally set in stone was cuneiform writing (‘t/here’; Set was also the Egyptian god who sealed his brother, Osiris, alive in a coffer/coffin and was to be regarded as evil incarnate), then the ages of lithography until the slippages of twenty-first-century digitalisation. The only things in today’s world set in stone are words chiselled on a gravestone, or glorious inscriptions on a monument meant to last aeons: rigid, inflexible, inhuman and often mendacious. What White has given us, instead is a poetry of wondrous non-dualistic oscillations between the profound, the courageous and the free.

Cecilia White’s chapbook can be ordered internationally from Picaro Press.